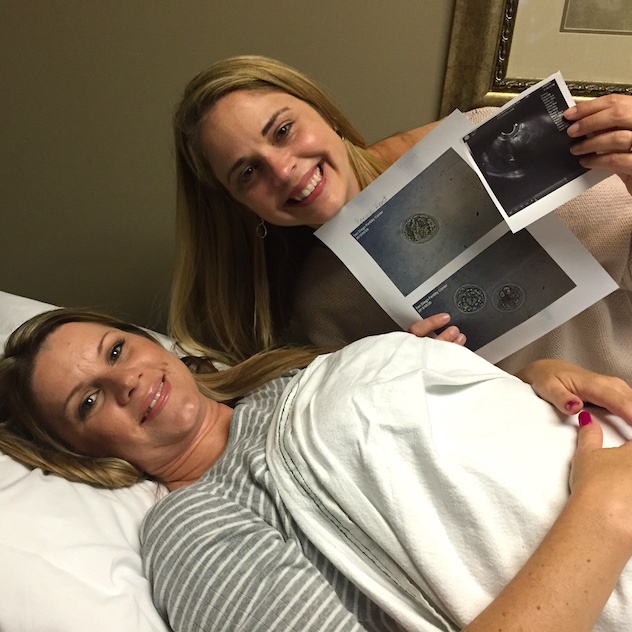 Bonnie Kent was running out of options. After several miscarriages, ongoing fertility issues, and a failed adoption, she and her husband, Justin, were desperate to add a second child to their family.

That’s where Stacy Clark came in.

As the church worship pastor, Justin had shared he and his wife’s infertility journey with the congregation, from the miscarriages to the failed adoption. One Sunday morning, he was discussing the obstacles he and Bonnie had been facing when Stacy’s husband (also named Justin) nudged her.

“Hey,” he whispered. “You should be their surrogate!”

Stacy had been considering becoming a surrogate for some time—she’d had some friends that had struggled with fertility, and others that had become surrogates themselves.

“I was blessed to have healthy pregnancies myself, so I wanted to provide that for someone else,” Stacy says. She knew Bonnie in passing—friendly acquaintances connected through the church community—but they weren’t close friends, and Stacy was hesitant on how to start the conversation.

“I knew they were about to make a decision on their next step in their fertility process, and so I knew I had to talk to them quickly, but I didn’t know how to bring it up,” Stacy says. “We didn’t know each other that well, so it was kind of an awkward thing to say, ‘Hey…uhh…want me to…have your baby?’”

Bonnie and Justin were thrilled with Stacy’s offer. She recalls knowing Stacy as a ”very well-liked, respected” member of the community. “It was almost like an angel came out of nowhere,” Bonnie says.

Back in 2011, Bonnie had 16 embryos extracted and frozen for attempted transfer later on. She became pregnant with her son, Jack, after her first (and only) fresh IVF transfer. Following the birth, she went through four rounds of frozen embryo transfers unsuccessfully.

They were relying on Stacy to carry at least one of their remaining six embryos to term. Twelve days later, their prayers were answered when her pregnancy was confirmed.

Throughout the pregnancy, Bonnie and Stacy related over feminine topics related to the pregnancy. They spoke about medical, emotional, and family-related elements of the surrogacy journey. They were texting every day, and before you know it, they developed a friendship.

“The whole thing has been no drama, no weird feelings—it just feels really natural,” Bonnie says. While their friendship evolved, the new baby developed, and Ivy Kent was born nine months after the embryo transfer.

For Bonnie, her family’s relationship with Stacy is incomparable. They may not speak as often now that the baby is born, but they make time to see each other every few months. She thinks it’s important to have Ivy know Stacy, and know the role she played in her life.

“It’s a really special relationship,” she explains. “It’s like that aunt or family member you don’t see as often or don’t speak to all the time, but it’s still this very treasured relationship.”

Surrogacy not only grants the gift of life to those unable to reproduce themselves, but gives surrogates the opportunity to give the gift of a lifetime.

Interested in giving the gift of a lifetime? We can help.

For our readers: There is no question that every act of surrogacy is compassionate, but this is an example of compassionate surrogacy, in which the surrogate carries the child without compensation. Neither party is an affiliate of WSS.